Huntington’s and our family 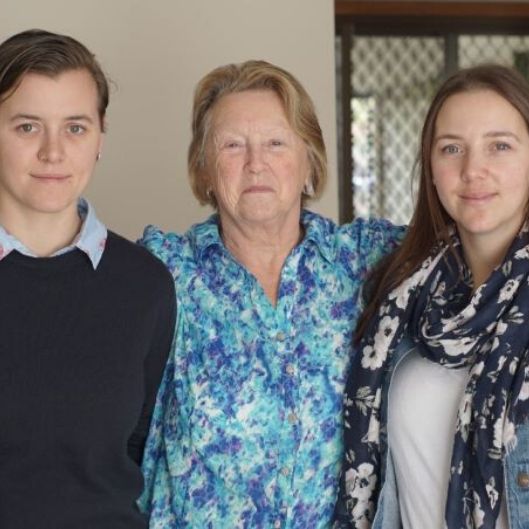 The Ferguson family knows all about the heartbreak of HD.

The disease has taken eight members so far, across multiple generations.

In the video below, family members share their memories of two of the people who have passed away, Wally Ferguson and his son Matt.

Wally was one of four siblings who had Huntington’s – a disease nobody in the family was even aware of for many years.

“We knew Wally’s father had something wrong and that is where the disease came from in the family but it was blamed on an industrial accident that he had,” Wally’s wife Jan explains.

“However, as the years went on it was clear it was something else and he gradually got very bad.”

Wally, who worked as a tool maker, never wanted to acknowledge the disease and he lived a busy life, working and doing the things he loved – travelling with his family, riding motorbikes, hang gliding and even parachuting.

He was only tested after his brother and sister died and Wally and Jan’s three children decided they wanted to know whether they had inherited the disease from their father.

“The kids went to get tested and they were told you can’t get tested until your father has been tested first because it’s a foregone conclusion if anyone is positive he will be as well and that is not the way you tell people,” Jan explains.

“So Wally went and got tested under sufferance. He didn’t want to go and even when he was told he had the disease he kept saying ‘no, no’ and said it was my fault eventually when he started to get ill, it was my fault he got tested because I talked him into it.”

Jan describes her husband as a smart and skilful man and said it was very hard for him to come to terms with the disease, which he started to show symptoms of in his late forties and which robbed him of the ability to concentrate on his work.

“He just couldn’t think things through, he would start something but he could never, ever quite get to finish it and it was very hard watching that because I know he was extremely frustrated that he wasn’t able to do things which made him angry, I understand that but it was still very hard to watch,” Jan says.

The impact of HD forced Wally’s early retirement around the Year 2000. His anger issues and social isolation led to a suicide attempt and, eventually, a move into a nursing home.

Wally’s granddaughters, Sally and Sidney, remember visiting him in a place they found confronting as small children.

“The one thing that I remember about my grandad is he was already in care and we used to go on the school holidays to visit him,” Sally explains.

“He would be so happy to see us that he would go to the coffee cart and steal all the biscuits off it and give them to us and he would be happy.”

Sidney says she experienced mixed emotions in the visits. “Obviously you want to see him but you don’t want to see him like that because it’s hard, it hurts you, they are so helpless you can’t do anything, you can’t help them, even if you wanted to,” she says.

For Jan, the last years of Wally’s life were harrowing as she watched a previously active and energetic man suffer from the ravages of the disease.

“With HD people tend to lose a lot of weight and become quite frail and he aged very quickly. Heartbreaking, its heartbreaking watching someone go through that,” she says.

Matt Ferguson – a guy everybody loved

Two of Wally and Jan’s three children, Tracey and Matt, were diagnosed with HD.

Jan describes her son as a “happy go lucky” character who was always active and loved riding bikes and motorbikes and playing in a band.

“Matt was the sort of guy that everybody loved,” she says. “He always had a smile on his face.

“He was in for anything. He would have a go at anything. Loved his pushbikes. When eventually his license was taken away he went back to the pushbikes and road his pushbike everywhere.”

She said her son, who was born in 1973, experienced the symptoms of HD much earlier than his father and in his thirties it started to take a toll on him.

Matt’s behaviour and moods led to the breakdown of his marriage. But his relationship with his two children, Zac and Sidney, remained strong.

His daughter Sidney says her father was “very loving and generous” and she remembers well his infectious desire for her and Zac to join him riding skateboards and bikes.

“I am grateful for the years I did spend with him. Obviously it wasn’t that long but I am grateful that it was such a good short time,” Sidney says.

She knew he had HD but would only see signs of it when Matt drank and would get “a bit more swervy, a bit aggressive – but never towards me”.

Jan says Matt he could see where his life was headed, having watched the impact of the progressive disease on other family members.

Combined with the breakdown of his marriage and the frustration and fear he felt, it led to a fateful decision one night in April 2009 to take his own life.

Tracey, who is now in her fifties, is in the latter stages of the disease and lives in a nursing home.

Hope for a cure

For the Ferguson family the generational impact of the disease remains a heavy burden.

“We have lost eight people in our family to Huntington’s so far. It is a lot of people and a lot of heartbreak,” Jan says.