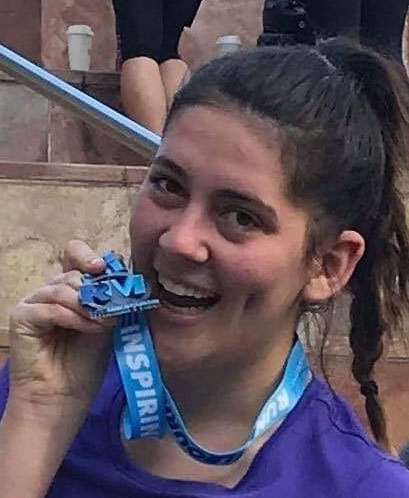 Kirsty Pleiter knows firsthand the devastating impact Huntington’s disease can have on a family.

Growing up she saw how it affected her aunt Lyn, who was in care, and passed away in 2009. She is close to Lyn’s two daughters, Lizzie and Kelly, both of whom have now been diagnosed with the disease.

“It is quite an awful disease,” she says.

“I had no idea that children had a 50 per cent chance of inheriting the disease and both my cousins were diagnosed with it about 10 years ago.”

In an effort to show her support for her cousins and raise money for Huntington’s Victoria, Kirsty decided to take part in this year’s Run Melbourne event.

“I am not a runner by any means but I did a run for MS with a friend and then decided that I wanted to do something closer to home,” she says.

“I’m inspired by the work of Huntington’s Victoria and I wanted to support them by raising money through my participation in Run Melbourne.”

The 26-year-old set up a fundraising page before the event which allowed her friends and family to track her training and donate before the 10 kilometre run, which took place in Melbourne on July 28.

Her efforts raised over $1,500, an outcome that came as a pleasant surprise to Kirsty. “People were more giving than I expected and it was just really nice to do it and feel that you are doing something worthwhile,” she says.

Kirsty, who works in the disability sector, is also focused on other ways to raise awareness about HD through conversations with her work colleagues and friends.

“Most people have no idea about HD or how the disease progresses,” she says.

“There are lots of judgements because of that. When I am out with my cousins you might get comments like ‘is she drunk or something?’

“I’m just trying to do what I can to raise awareness by having those conversations and supporting my cousins.”